I decided to write this article to help a friend who would like to Dual-boot his laptop currently running windows 7 but he wants to have the option of booting it in windows 10 sometimes.

To get started I will need to introduce you to the concept of Dual-booting in case you are new.

What is Dual-Boot or Dual-booting?

In computer language, Dual-Boot refers to a situation one computer has two or more Operating Systems.

Sometimes, you might need to have more than one operating systems installed on your computer so that you use then according to need. For example, I am a proud user of Linux largely because of its security, reliability, the fact that it is virus-free and of course it comes at no cost! My wife, on the other hand, loves windows because of its easy to use. So our home computer has both Ubuntu and Windows 7 installed. Husband boots his Linux while wife boots her windows.

Dual-Boot is also sometimes referred to as “Multiboot” – a dual boot system where more than two operating systems are hosted on the same computer. It’s possible to host all the Boots You want then select at startup which operating system you wish to fire up.

Why You May Need Dual-Boot.

Some of the reasons you might want to have dual booting on your computer include:

Why you Should’t Dual-boot Your Computer.

The main disadvantages of running a Dual-boot on your computer include:

How to Dual-Boot Windows 10 with Windows 7 or 8

We will now proceed to learn how you can Dual-Boot your Windows 10 computer with Windows 7 or 8 or even a completely diffrent OS.

The methods discussed in this article can be followed to install any oparating system you wish to add to your computer. In some cases the OS you add could be limited or influenced by the one you installed before. Its therefore important you think through your needs before you start adding OS after another.

Steps to Dual-Boot Windows 10 with Windows 7

First, you’ll need to make space for Windows 10 on your hard drive. If you have two different hard drives in your computer and one of them is empty, you can skip this part. But you’ll probably want to install Windows 10 alongside Windows 7 or 8 on the same hard drive.

Whether you’re using Windows 7 or 8, you can use the Disk Management utility to do this. Press Windows Key + R, type diskmgmt.msc into the Run dialog, and press Enter to launch it.

Locate your system partition — that’s probably the C: partition. Right-click it and select “Shrink Volume.” If you have multiple partitions on your hard drive, you could also choose to resize a different partition to free up space. 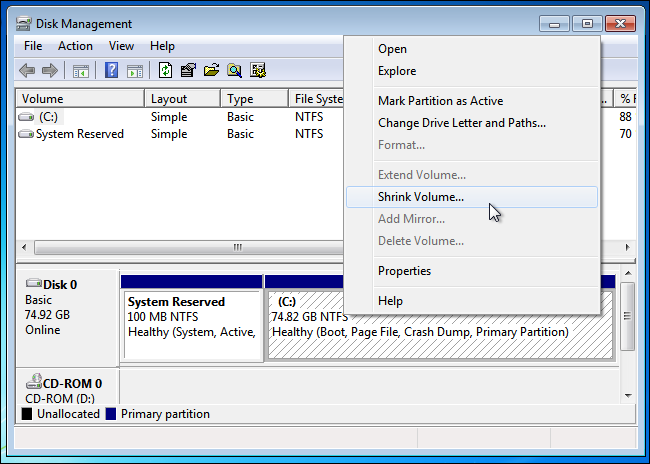 Shrink the volume to free up enough space for your Windows 10 system. Microsoft says Windows 10 has the same system requirements as Windows 8, and the 64-bit version of Windows 8.1 requires at least 20 GB of hard drive space. You’ll probably want more than that. After shrinking the partition, you can continue the process.

Leave the DVD or USB drive in your computer and reboot. It should automatically boot into the Windows 10 installer. If it doesn’t, you may need to change the boot order in your BIOS. If you have a Windows 8 computer that comes with the newer UEFI firmware, you’ll need to use Windows 8’s advanced boot menu to select your USB drive or DVD drive when you boot your computer. Install Windows 10 Alongside Windows 7 or 8

Go through the Windows 10 installation process normally. Select your language and keyboard layout and then click “Install now.” After agreeing to the license agreement, click the “Custom: Install Windows only (advanced)” installation option. Upgrading would upgrade your existing Windows 7 or 8 system to the Windows 10 Technical Preview. Custom lets you install Windows 10 alongside an existing copy of Windows. 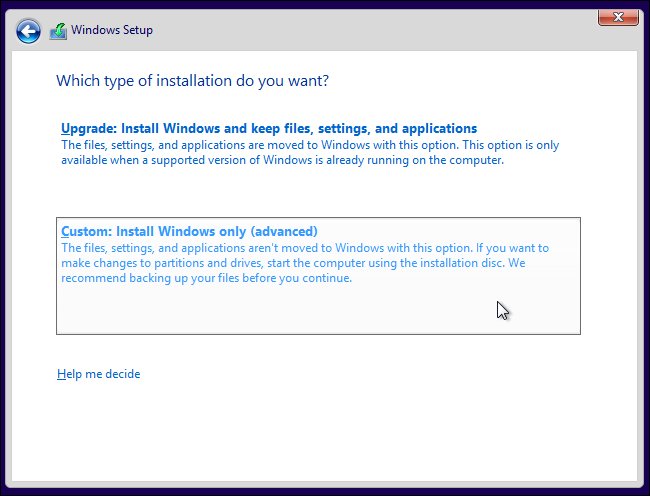 You’ll be taken to the “Where do you want to install Windows?” screen, which handles partitioning. You’ll see an “Unallocated Space” option here, assuming you resized your existing Windows partition to free up space earlier. Select it and click New to create a new partition in the empty space.

A Size box will pop up asking how big you want the partition to be. By default, it will take up all the available unallocated space, so just click Apply to create a new partition using all that space. The Windows installer will create a new partition and select it for you. Click Next to install Windows 10 on that new partition Windows will finish installing normally without asking you any more questions. Choose Between Windows 10 and Windows 7 or 8

You’ll now be able to choose between Windows 10 and Windows 7 or 8 when you boot your computer. To switch between them, restart your computer and select your desired version of Windows in the boot menu. Click the “Change defaults or choose other options” link on this screen to change the options. From here, you can choose the Windows operating system you want to boot by default and control how long the operating system selection will appear before it automatically boots that default version of Windows. Both versions of Windows use the NTFS file system, so you can easily access your files from whichever version of Windows you’re using. You’ll see your other Windows drive appear with its own drive letter in File Explorer or Windows Explorer. You can right-click a drive and select Rename to give it a more descriptive label, like “Windows 10” or “Windows 7.” If you want to dual-boot Windows 10 and Linux, you should install Windows 10 first and install your Linux distribution of choice afterwards. That’s the ideal way to set up any Windows and Linux dual-boot configuration — Linux will install the GRUB2 boot loader and set it up so you can choose whether to boot Linux or Windows when you boot your PC. If you install Windows 10 afterward, it will install its own boot loader and ignore your Linux system, so you’ll have to restore the GRUB2 boot loader.